And we are loaded…

Yea, it’s not the way it sounds…

This weekend, we loaded two shows in two days.  On Friday, I loaded the set for “And Then There Were None” and Thomas Jefferson School.  While there is still plenty to do before it opens, they have a set to rehearse on this afternoon. 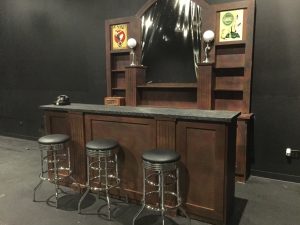 Last Thursday afternoon, Larry, Gary and I took a large load on stuff to the Marcelle and stashed it in the green room since it was a nice day. The pieces for the bar were pretty good size and I was not certain that they would fit through the front door.  By loading it on Thursday afternoon, I could have the dock readily available should I need it to get one or more pieces in.  Fortunately, even the front bar, which is the biggest piece just fit with less than an inch to spare.

Saturday, Kate, Melanie, Patrick, Patrick’s daughter Lydia and girlfriend Shelly, Kathleen, Richard, Paul and I loaded in and completely installed the set for “Atomic” at New Line.  At 8:30AM, Patrick, Lydia and Shelly met me at U-Studios and we loaded the trailer with the furniture, door unit, and components to make the floating beam ceiling.  At 9:30, we pulled up at the Marcelle and Richard was waiting for us.  After unloading the trailer into the lobby, we began what is probably the biggest hassle of each load in…rearranging the seating platforms and chairs.  This time, STL UpLate had not had time to stack the chairs so those all went first, stacked into the band area.  The seating arrangement for this show was not as challenging to set up as it was for “American Idiot”.  We only had to add one of New Line’s wood platforms for the tech table. But to get to the tallest risers, we had to completely disassemble the seating from STL UpLate before we could start putting ours in place.  It is a real Chinese puzzle moving those things around and getting them in the right order. After the risers were set, we moved most of the chairs up on them to get them out of our way and focused on the set. 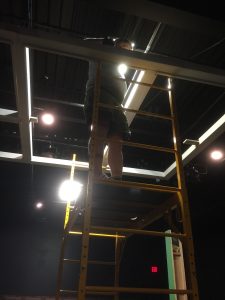 The ceiling beams were salvaged from our production of “The Elephant Man” that Kathleen directs in November and Patrick had put them together and struck them for that show, so he and Shelly set up the scaffold and immediately began to tackle that.  I wanted the bulk of it up before we started putting things in beneath it.  While they started the ceiling, Paul and Richard finished guard railings on the seating risers. 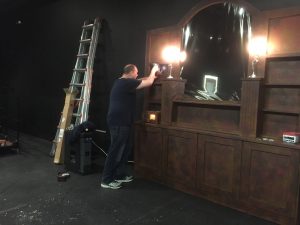 Under the direction of Kate, Paul and Richard got the mylar mirror in the bar and the lamps wired.  Paul and Richard then got the bar installed while Kate, Kathleen and Melanie started the big green wall.

All in all, this install went off without a hitch.  The components that we shop-built fit almost perfectly and nothing needed major modification once we got it to the Marcelle.  We wrapped up on Saturday in about 4 1/2 hours and by the time we cleaned up our mess, loaded tools into the car, took a few photos and locked the doors, we were on our way home by 3PM. 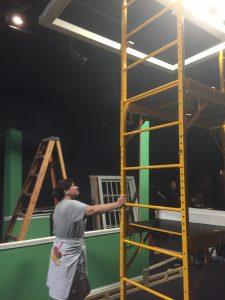 On Sunday afternoon, Kate and Melanie met me back at the Marcelle and we touched up paint, installed black fabric to mask the back sides of a couple of pieces, and wired practicals. Left on the agenda is some more painting, including something on the floor, a couple of guard rails on the tech platform and maybe a step, if I get on made.

Next, I have to turn my attention on the lighting.  I already have a pretty good sense of what I plan to do for a light plot; where lights hang and how they might get used.  I have to spend some time at rehearsals though and get my head into Scott’s staging and look for opportunities to do some special things.  That is this week with hang and focus on Saturday…  my “hell week” has begun.

See you at the theater, R 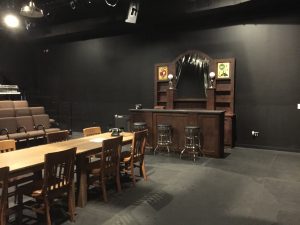 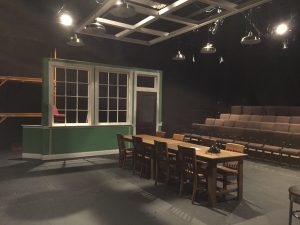