Starting “Zorba,” I really didn’t know the show, but love Kander and Ebb and respect their work. Even though it is an early one, I was confident that it was a decently crafted script and I have been looking forward to it.  Of course…  “Zorba” is an old show, like as old as I am. It predates the structural revolution of musical theater that really took hold in the 1970’s.  So, in staging terms, “Zorba” is much more akin to “Fiddler” than to “Cabaret”.  As a designer, this has big implications that most people don’t really think about. In the 70’s, Sondheim, ALW, Schwartz and others really changed how we think about staging a musical.  Things became more abstract.  We no longer have to stick to realistic settings for each scene.  I will never forget the first time that I designed for The “Wizard of OZ” in 1999 and realized that there are 17 unique locations!!!!  That is what I mean by an OLD show. Old shows relied on flown canvas drops and big carted or trapped set pieces to literally make all of those locations. Now, don’t get me wrong, designers try all the time with varying degrees of success, to abstract the settings for old shows. Designing for New Line, we typically don’t do old shows and I am rarely faced with this dilemma.

Now that we are in the Marcelle, we have none of the staging resources that make doing old shows, easier. (not easy, just easier) There are no flies, no traps, no wings, no curtains to hide behind.  I HAVE to abstract an old show.  “Zorba”… well, “Zorba” bounces all over the place as far as settings.  Hell, we don’t even stay on the same piece of land.  So, I am faced with abstracting the set into a unit set and counting on Scott and Dowdy to convince us that we have moved to another location through staging.  Of course, I will help myself out a bit with lighting, but that is a topic for another day. 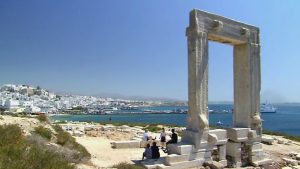 The approach that I decided on was that we had to set the region and the period. I could not get caught up in creating cafes, plazas, bedrooms, gardens, a mine and all of the other places that Zorba finds himself. So, I looked for some iconography of Greece circa 1920.  The white villages tumbling down an arid hillside to a blue sea, ruins of ancient structures scattered about in between “modern” structures.  If I can put us in Greece in the 1920’s, at least I have a chance of abstracting all of these required locations for the show.

The next feat is that Scott is staging the show in a traditional “proscenium” format, with the seats lined up in rows on risers across the black box, with the playing area against one short wall. To get a decent number of chairs in, we end up with 3 rows on the floor and this really causes site line problems.  So, that means the playing area has to be raised, or at least most of it.  So, I have to build a stage out of platforms instead of using the theater floor as the playing area.  And this is a big cast with production dance numbers.  Scott wants to be able to see the cast dance.  A BIG raised stage (relatively)…

The compromise that we reached is; a fairly large central platform that is raised about 24″, a smaller platform stage right that is raised another step up at 32″, and a reasonable playing area down left on the theater floor where non-dance scenes can take place and it is OK for some audience to only see the actor from the waist up. 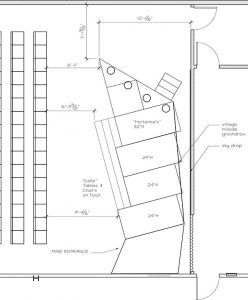 A significant number of scenes take place in or around Hortense’s home/garden/bedroom.  So, the smaller and highest level is hers.  It is back dropped with a 3D ruin of columns and pediment, so it IS a building.  Stage left, I have placed an archway that disappears into darkness that becomes the mine, but is man-made enough to also be a building facade. 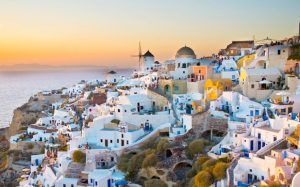 At the back of the platforms, I will run a ground row that looks like the village of white plaster buildings that tumble to the sea, with the sea beyond.  Most of the ground row is a distant horizon, but above the mine structure, I placed a domed, Greek Orthodox church, still background, but much closer.  This helps remind us that we are in Greece in the 20th century and not 500BC. 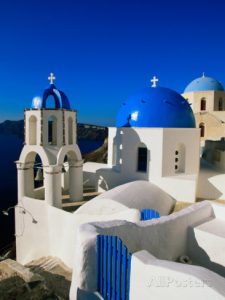 Now, for many New Line shows, I have relied heavily on a black background. The shows have been abstract and a few pieces in front of black are usually enough to set the place.  But Zorba takes place in the bright sun in the Aegean Sea.  There is even dialogue in the script about the bright sun.  So, I am falling on to an old show device…a muslin cyclorama, pale blue and lit with a wash of light to create that expansive Mediterranean sky. 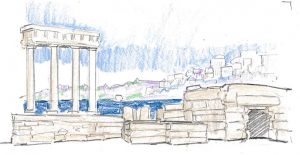 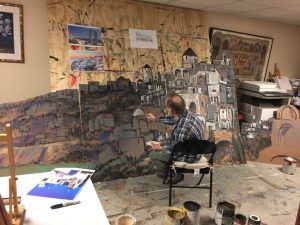 So, that’s the concept.  I got the ground row cut out and Gary began painting it.  I have purchased four 12′ high cardboard tubes to make columns for Hortense’s house. And the pre-load-in building commences.

More as we progress… R