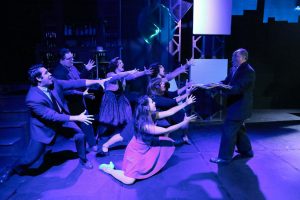 Then, September hit with the start of the school year and New Line’s Lizzie was up.  Set and lights for that one. 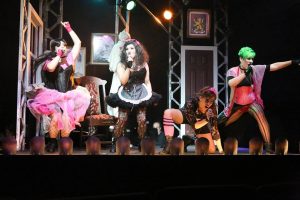 As soon as it was running, my attention turned to the fall play at school. I directed Radium Girls for Thomas Jefferson School, which was on stage the first week of November. 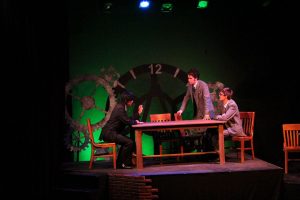 Over the holiday break, I designed two shows simultaneously. The first to hit the stage was Red Scare on Sunset at Stray Dog Theatre in February, followed immediately by Anything Goes at New Line Theatre which managed to get me noticed by the Post Dispatch readers who gave me the 2017 GO Award for Scenic Design and first runner up for Lighting Design. 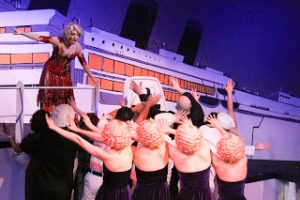 I rounded out the spring with the spring show on stage at school, Arsenic and Old Lace. (still under construction in this photo) 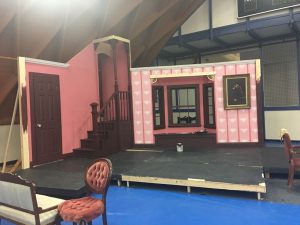 I capped the spring off with set and lights once more for Yeast Nation at New Line. For this show, I had the cast under water, on a primordial reef. It was fun working in 3/4. I washed the whole audience in blue light that slowly undulated like waves above for the whole show…so the audience was in the fishbowl with the cast!

I didn’t even get to see this show on stage, because the night it opened, I was driving west, on my way to Glacier National Park for a summer job. 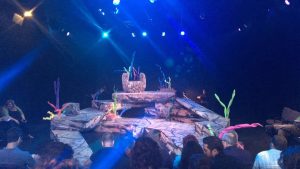 So, as I hit mid-summer, my mind turns to the fall.  My first project will be Zombies of Penzance at New Line…those designs are gelling as I write.  PLUS, the fall show at TJ this year will be Lanford Wilson’s The Fifth of July (ironic that I am writing this on the 4th!)

I promise to post more as I get rolling. I am hoping that the coming year will leave me a tiny bit of extra time to post my thoughts and ideas as they form and become real in the shop.

See you at the theater…R