With Springer on stage and having a fantastic run, I can turn my attention to our other big and exciting project happening...New Line's new home in Grand Center  being built by the Kranzbergs.  U-Studios completed the drawings a few weeks ago and prices were finally pulled together that met the budget.  About two weeks ago, the contractor got the building permit from the city of St. Louis and demolition began.

Last night before the Off-Line talkback for Springer, Scott and I were talking and he commented that it is still hard to believe. So many times before it has almost happened and then the project died and we did not get our new home.  As I opened my phone to show him the following pix, I responded that this time it is REAL...real money is being spent right now!  IT IS HAPPENING!!!!

So, right now, it is a bit of a skeleton, but if you are a visual person, while looking at these photos maybe you can imagine what it will be when it is done. 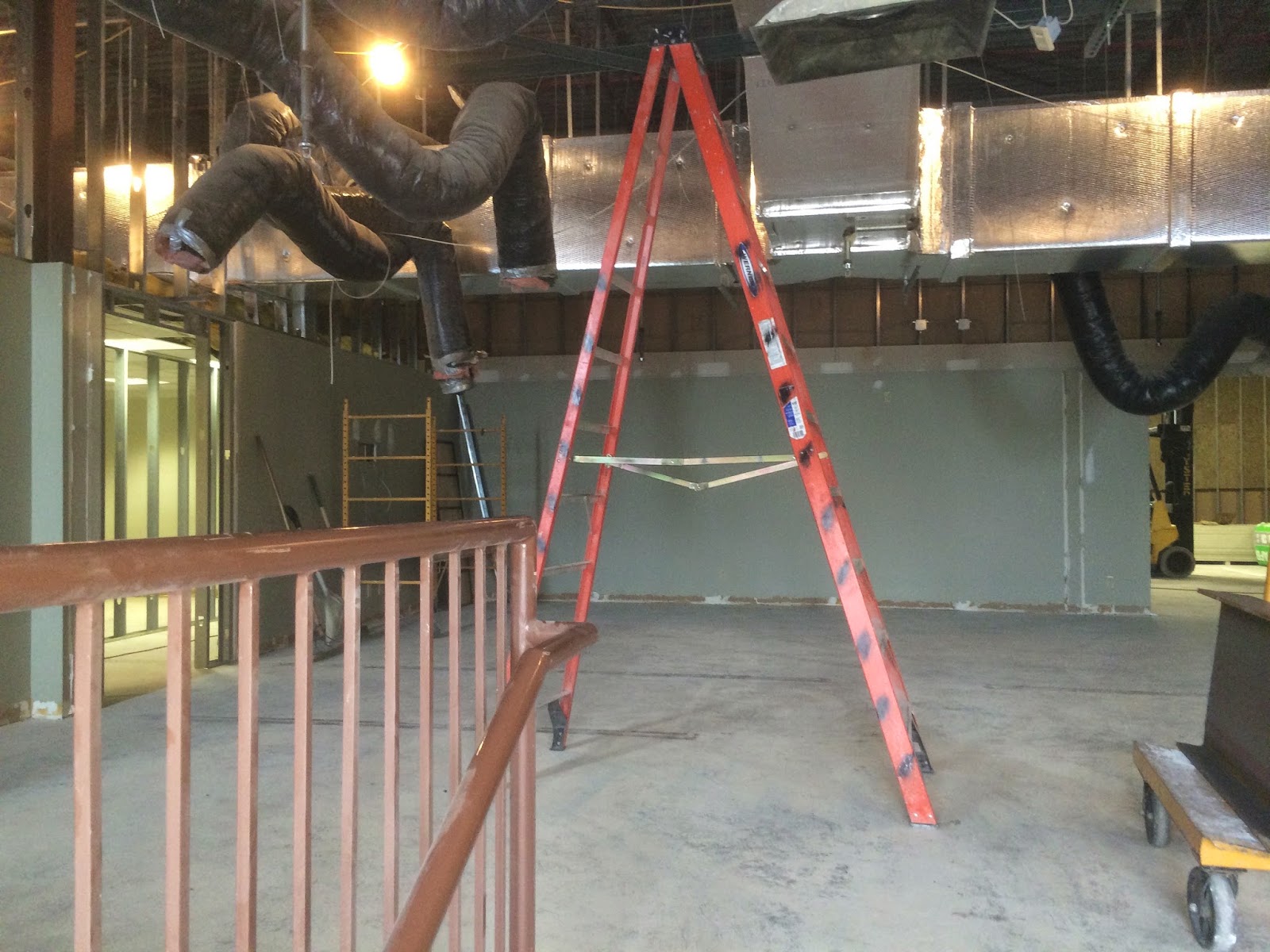 The walls and ceiling that used to be in the area of the new lobby and green room were removed and some of the new walls framed in place.

The first pic is immediately when you step in the front door, you are down a couple of steps. This view is almost the exact same view as Gary's rendering is take from. 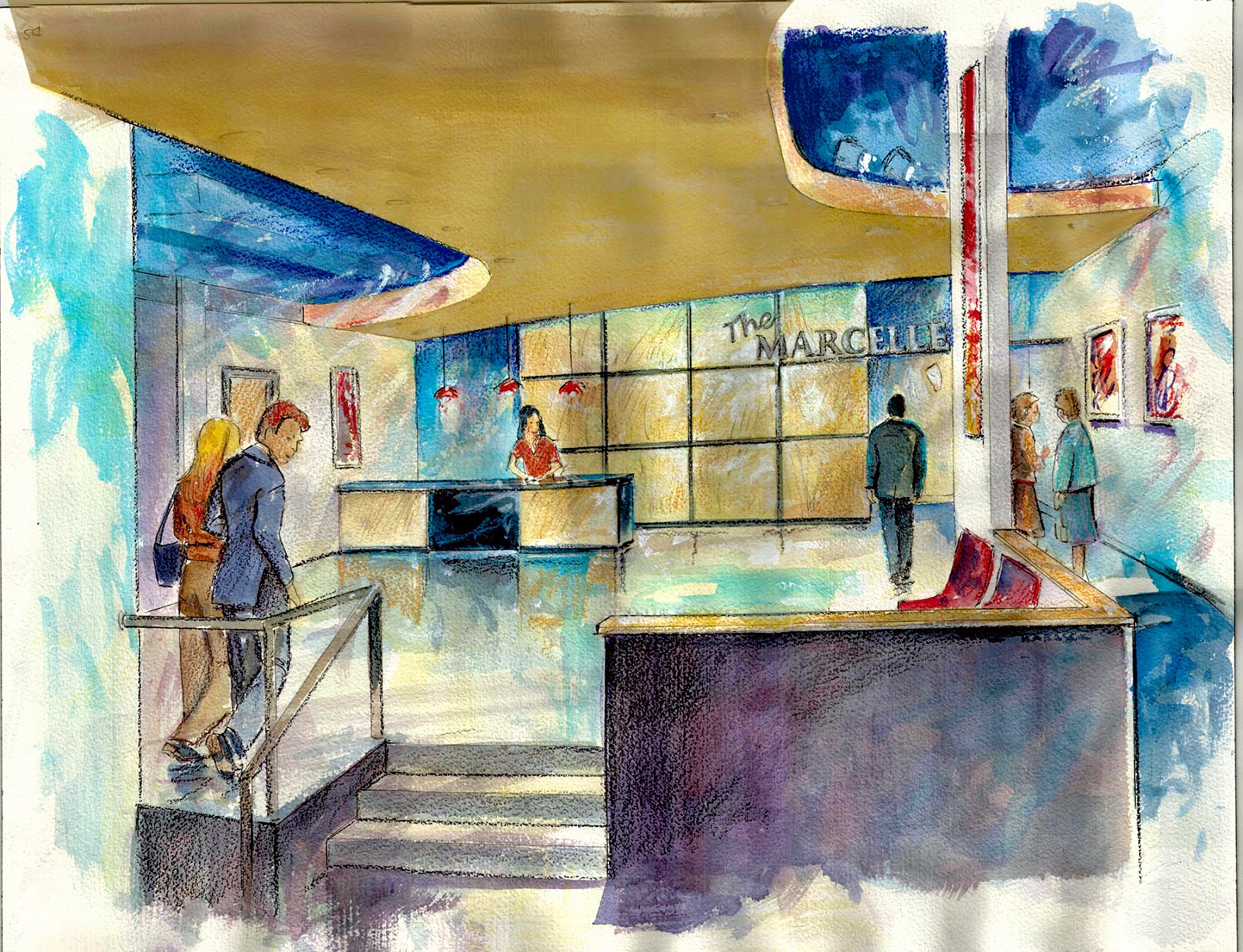 The yellow "cloud" will float below the ductwork, some of which will have to remain to serve the adjacent offices.  Also, the wood panel wall that screens the door into the theater has not yet been framed. 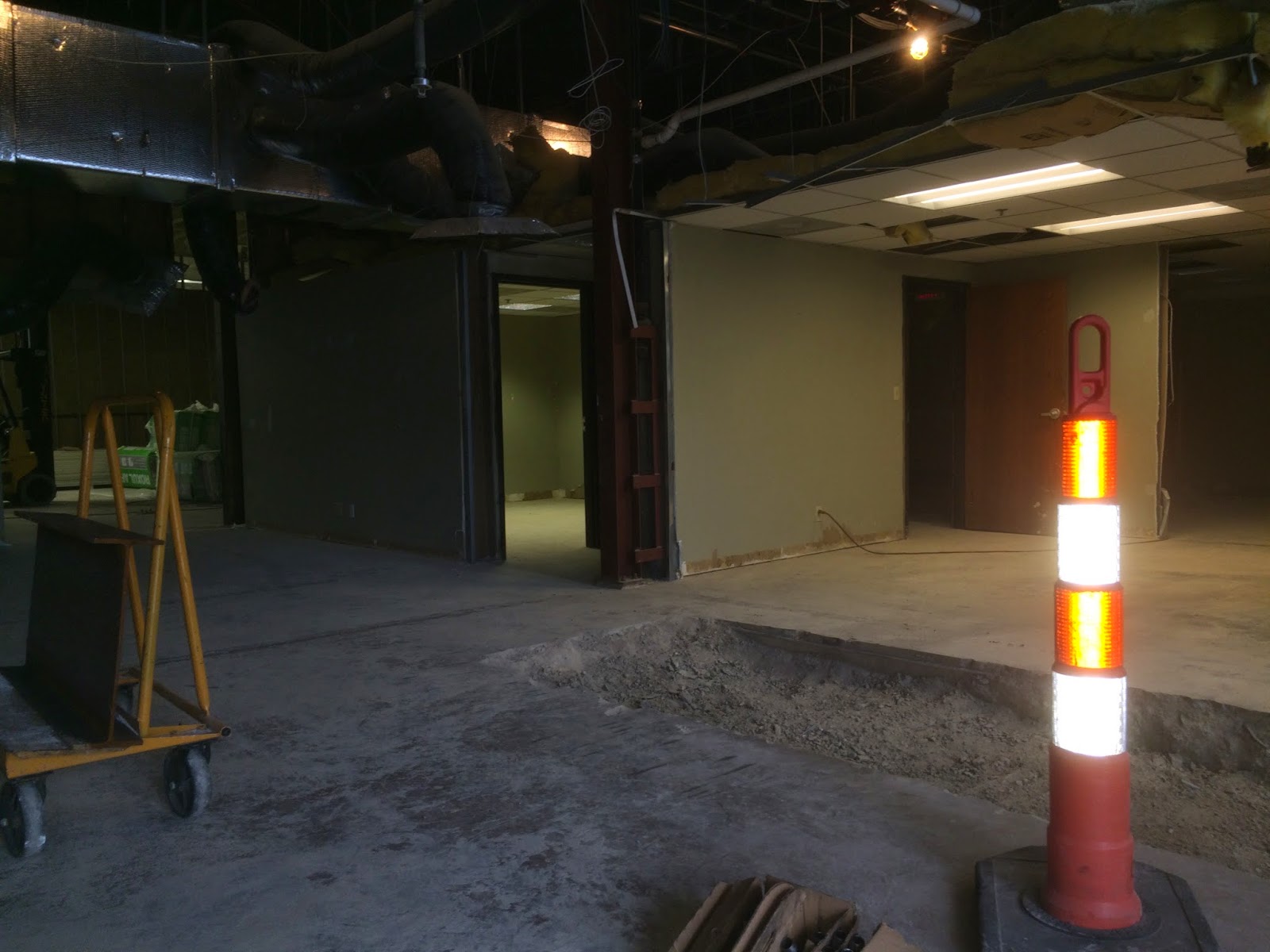 From the same spot inside the front door and looking toward the direction of the hall leading to the restrooms and the green room.  The restroom wall cannot be constructed until after the concrete for the ramp is poured and the plumber gets all of the piping put in the floor. 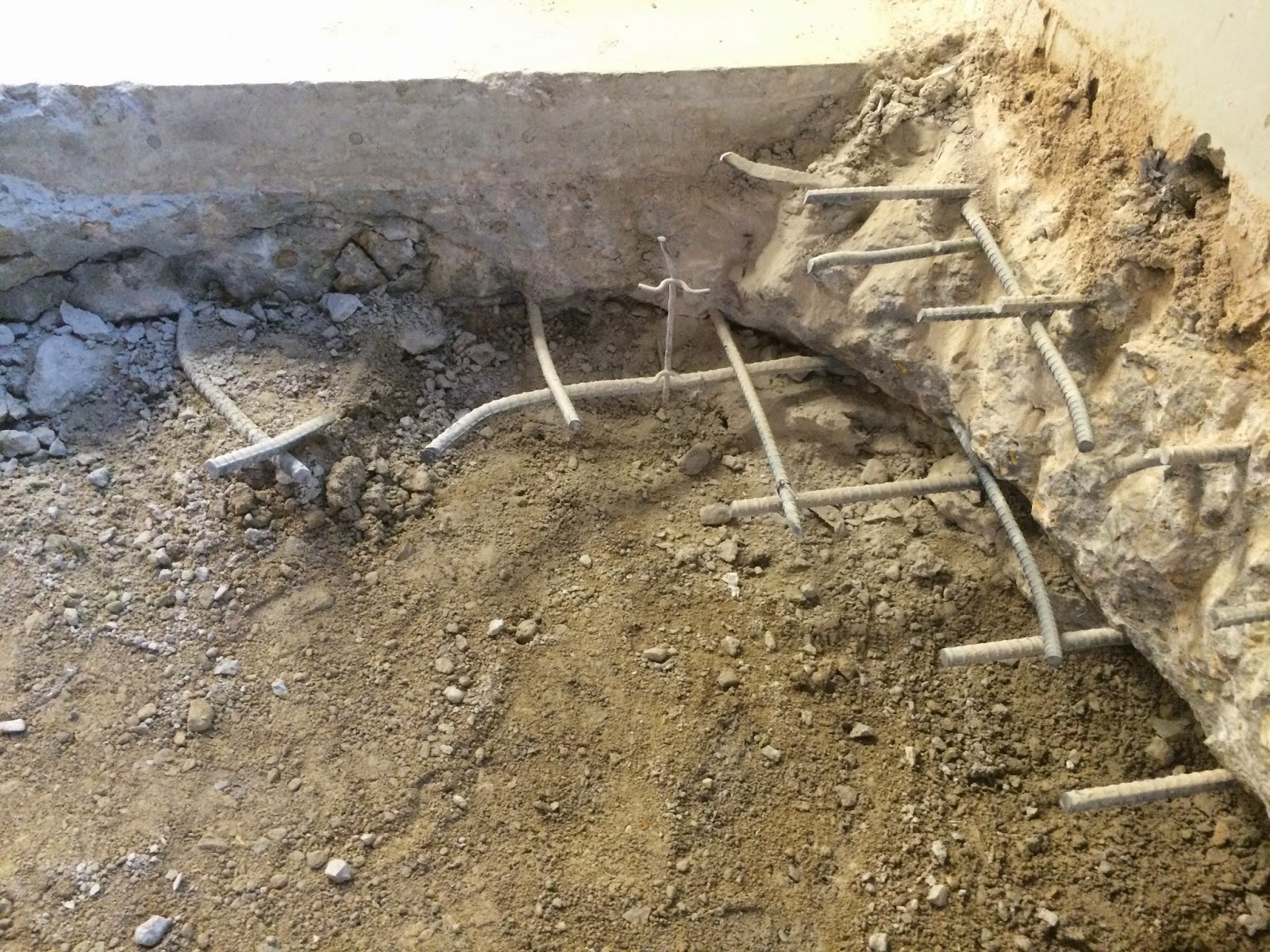 When the contractor cut the existing concrete floor, it is built like a HIGHWAY!  It is 12" thick and has two layers of steel reinforcing.  I know that it used to be a warehouse, but what the hell were they storing in there? 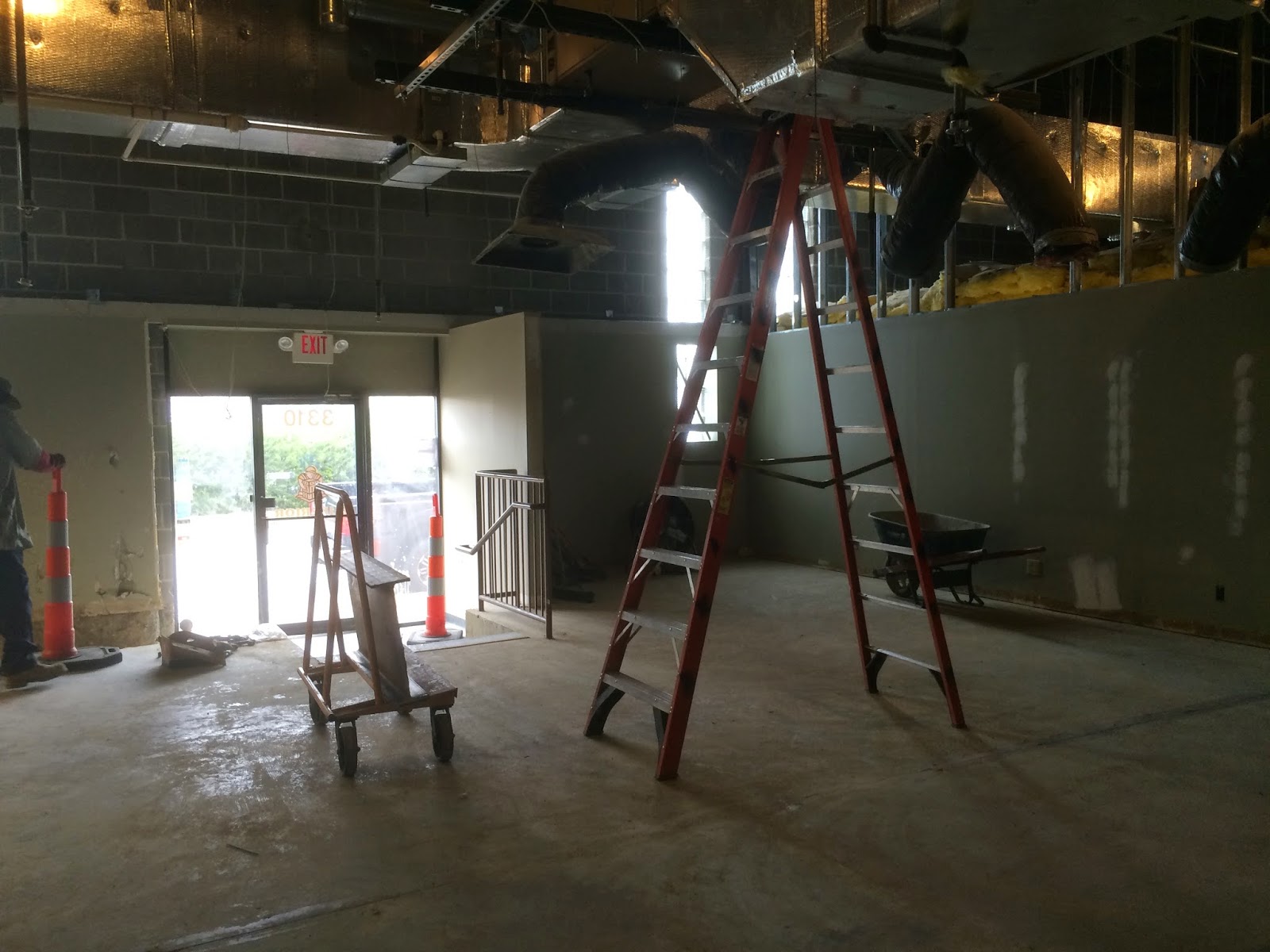 The next view is stepping out of the new theater looking toward the front door.

To the right of the steps is where the box office will be, in the alcove. 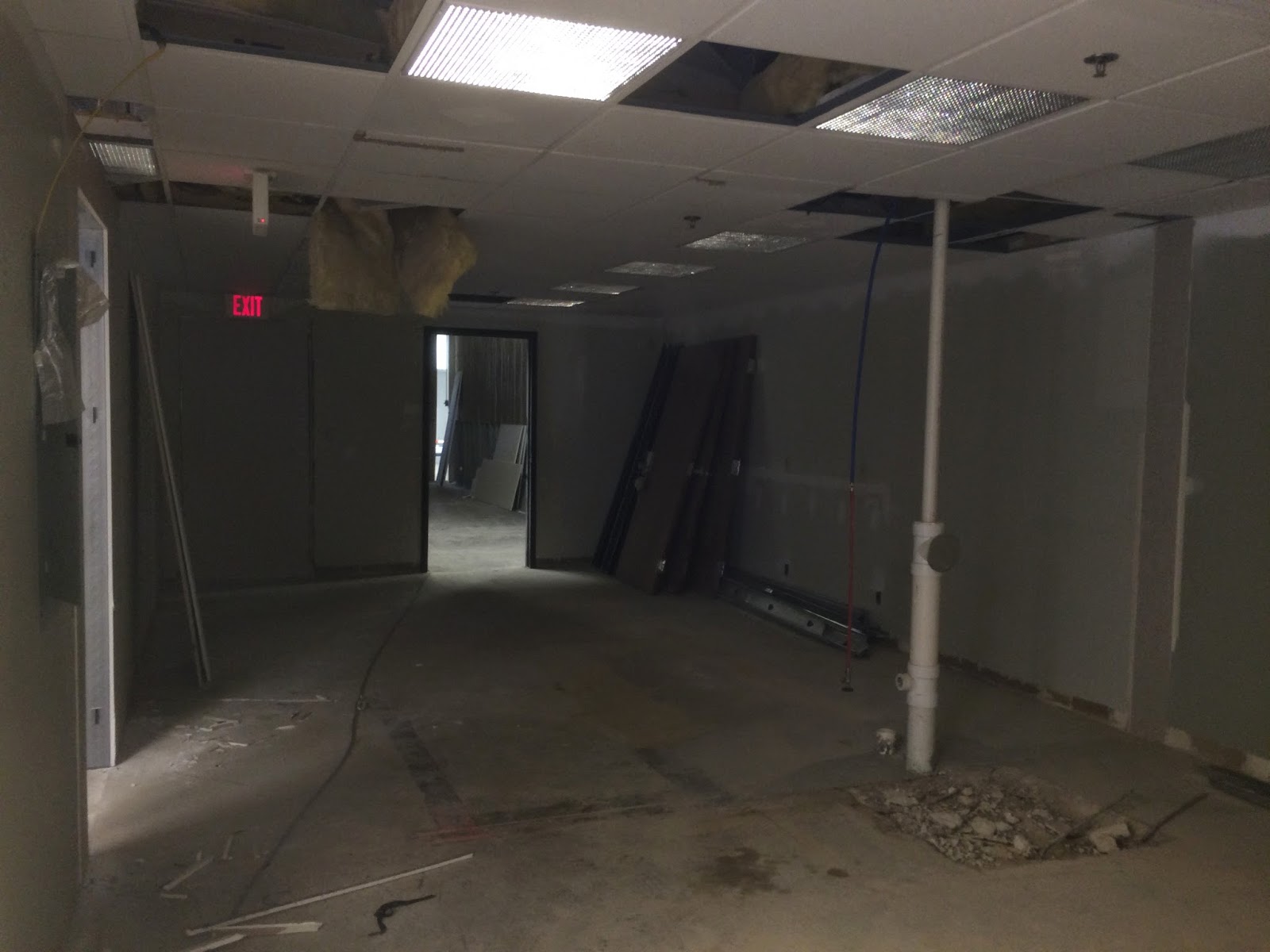 The space is opened up for the new green room.  The pipe in the middle of the room used to serve a sink in the former lunchroom and will be removed.

When finished, there will be shallow counters with mirrors and lights down both walls. The door at the end leads to the theater storage room and into the theater. Behind me will be a restroom with shower and two changing rooms. 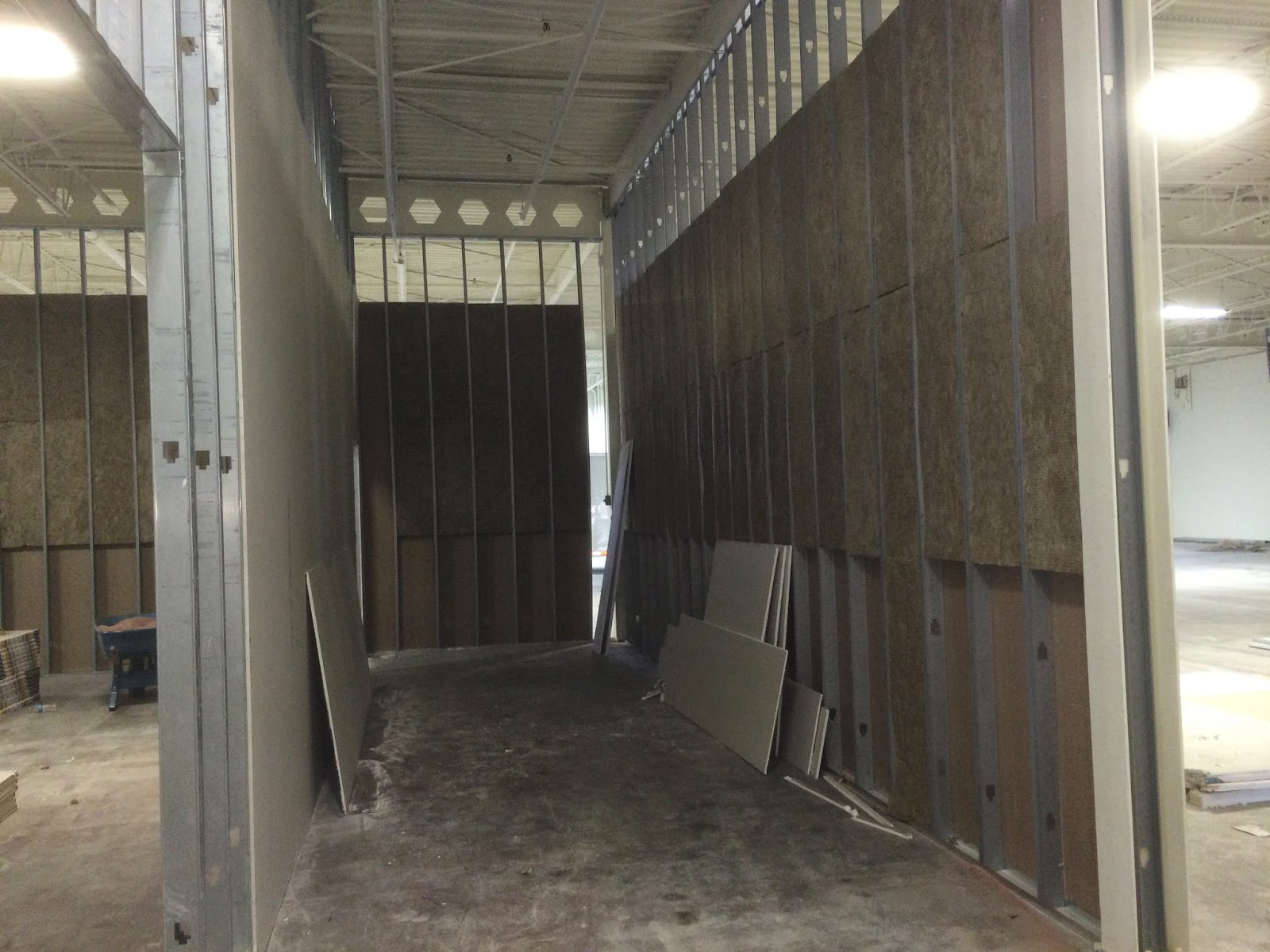 We will have some storage in the new space.  The storage room buffers the theater from the loading dock.  In this shot, the dock is to the right and the theater to the left.  At the end of this room, a portion will be walled off as secure storage for New Line's expensive equipment. 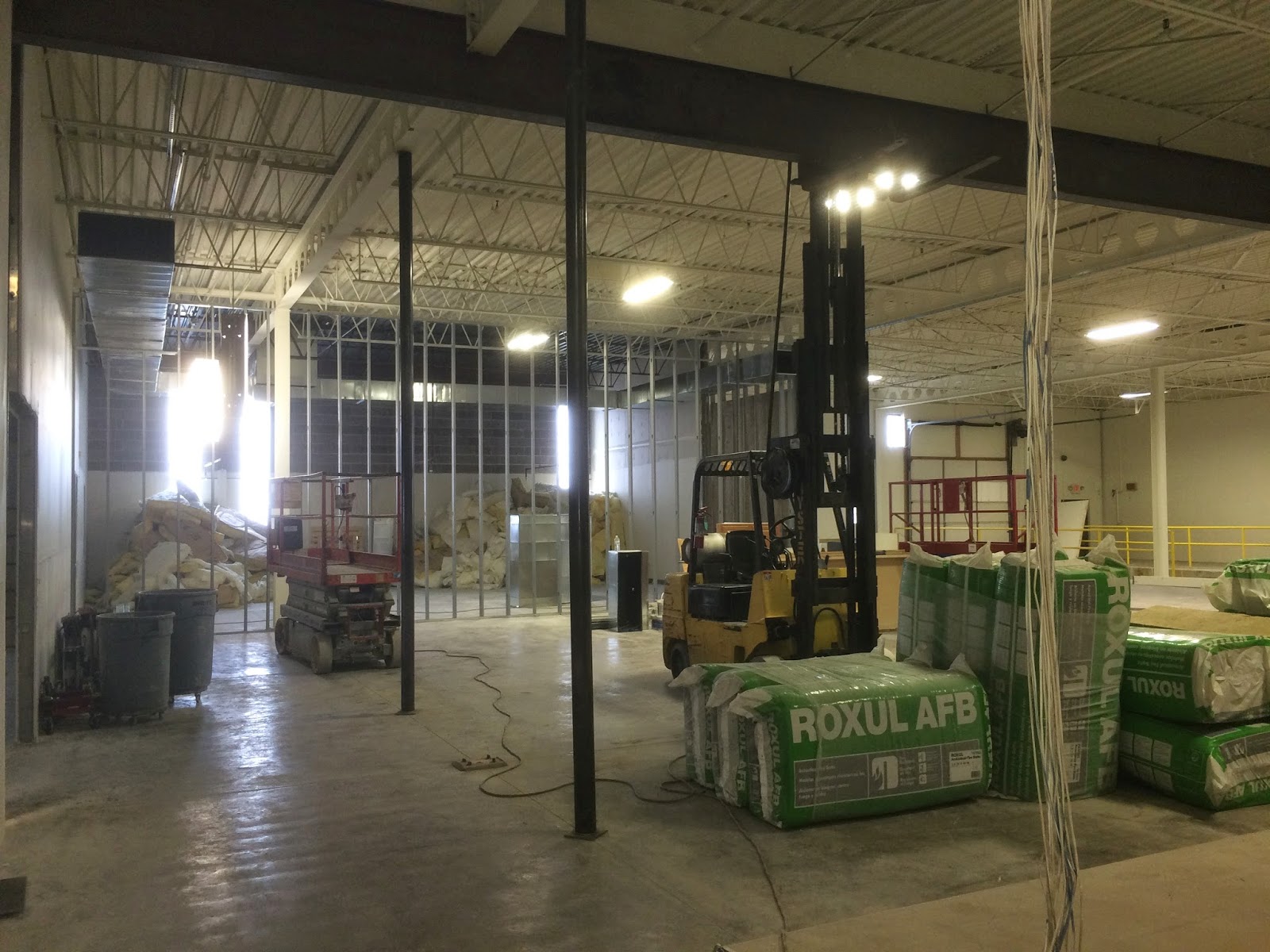 Finally, stepping into the new theater space from the storage/green room and looking into the end where the seats will be for most shows.

The new space is about 37 1/2 feet wide, 50 feet long and 14 feet tall to the underside of the steel structure.

Right now, you see two temporary columns in this photo.  Those are only supports to hold up the roof while the new steel beam was installed.  There used to be a column in the new theater about 8 feet off the north wall.  If you look closely in this photo, you will see the anchor bolts still in the floor where the column used to be. Without moving that column, it was almost impossible to seat more than 100  and allow for good sitelines. 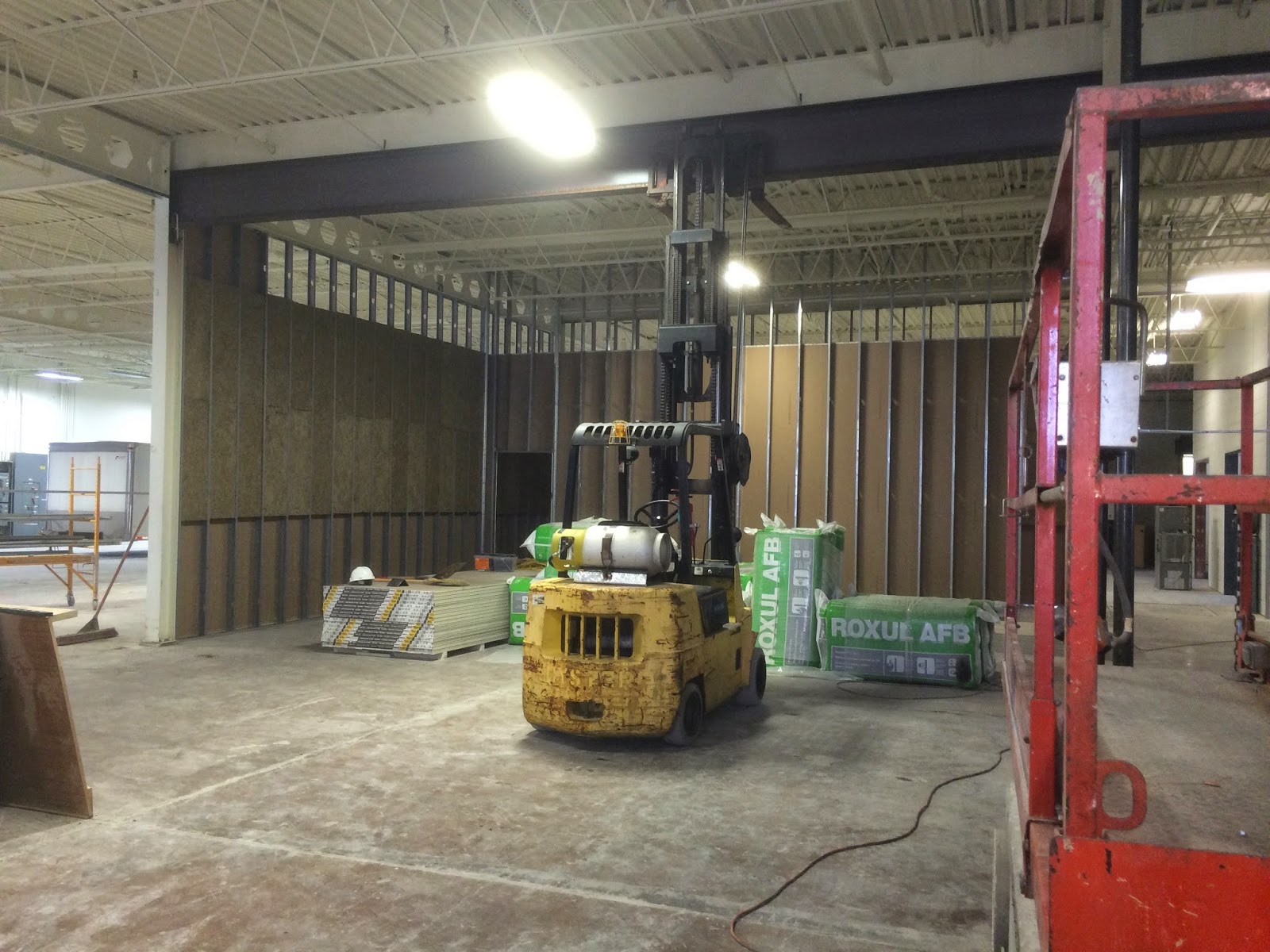 The next picture is standing with my back to the seats, looking in the direction of where the stage will be located most of the time.  It IS a black box and has completely moveable seating that can be reconfigured. But, realistically there are probably 3 or 4 configurations that we will use most of the time.

Once the walls are all built, a plywood floor will be floated on top of the concrete. This will make the space quieter and we will be able to screw into the floor.


So, this is just a little bit of a teaser as things progress.  I am already planning for our next show, "Three Penny Opera".  In fact, Scott and I came up the overall staging concept for it while standing in the lobby at COCA last Monday evening before the St. Louis Theater Circle Awards ceremony. More about that subject as I get something tangible to talk about.

In the mean time, I promise to provide periodic construction updates in between posts about the next show.  AND if you haven't seen Springer, get there this weekend!
R