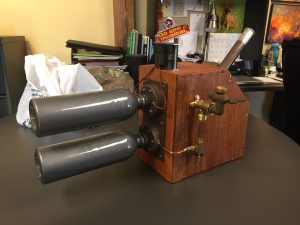 In addition, at New Line, last Saturday we hung and focused lights. This was my first time to do lights in the Marcelle because Ken has lit the last three New Line shows.  I suspected that it would be easier than lighting a show at Wash U South because the fixed seating and no catwalks above meant moving an extension ladder around and working it into the rows of seats. In addition, WUS was not cabled for DMX and did not have auxiliary power outlets scattered in the grid…lessons that I used when planning the Marcelle.  That used to take hours just cabling.  We finished all of the the hang, cabling, and focus in just 6 hours at the Marcelle!  What a difference.  Plus, we were able to hang 2/3’s of it from scaffold rolling on the stage. The remaining 1/3 we could reach from a step ladder by moving one row of stack chairs!

Tuesday evening, I sat thru rehearsal and taped it with my iPad.  I do this when I light a show because I then sit at the board in an empty theater and rough in the cues. Wednesday after rehearsal at TJ, Kate and I met at the Marcelle and programmed ll of the cues for Act 1.  I was happy with all but one special effect, which seemed too choppy for my liking.  So, Wednesday way my second 16 hour day of the week.  On Thursday and Friday, we had performances at TJ and after Friday’s show, we struck the set. Friday morning I had an epiphany about my lighting effect and ran to the Marcelle first thing to fix it.  Fortunately in about two hours, I got it to where I wanted it, then headed to TJ for the final performance. I got finished with strike and into the car by about 6:30PM and headed back to the Marcelle. Kate met me and we finished Act 2.  We had the whole show done and were on the way home by 10:30PM…another 16 hour day.

Saturday morning, I was up early and headed back to the Marcelle by 11 for cue to cue at 1:30.  I still had some things that I wanted to do, like relamp the house lights so that they didn’t flicker as they dimmed. That has been a chronic problem since we installed them with LED lamps. The LEDs just don’t provide enough of a load for the dimmers.  Putting a 90W halogen on each channel solved that problem.  Also pulled the diffusion out of them to minimize light spill onto the walls and the set.

Cue to cue took about 2 hours with another hour or so of adjustments afterward.  All in all, I was headed home by 4. 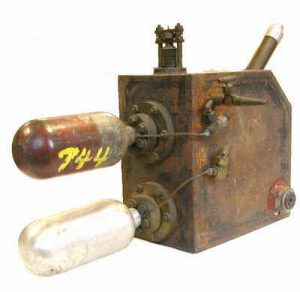 Sunday morning, I could finally turn my attention to making the one last prop that we need for the show.  This is not something that I was going to be able to buy anywhere.  There is a scene early in Act 1 where Fermi, Szilard, and Teller have realized that neutrons could be used to split an atom and they are trying to detect them in a reaction.  Well, in 1940, you couldn’t just go to the Flinn catalogue and order a neutron detector. For most of the research done in this era, the scientists cobbled equipment together out of stuff that they had around and made a box out of wood to hold it. So, I can’t just buy one on eBay.  Kathleen found a photo of one found in a storage locker at University of Chicago, where our scene takes place in the show.  While there is no way to know if this is the one that our scientists used, it is a pretty reasonable assumption that it looked something like this.

I made the box out of some scrap luan and birch plywood and stained it mahogany so that it had an old-fashioned feel to it.

I got two 1-litre bottles of water at QT because the shape of the bottle was similar to the aluminum canisters that they used for the noble gases. Spray painting them with silver spray paint was good enough.  The mounting manifold for the canisters is just plywood with some pan head screws stuck in to look important.

All of the gas hardware on the side was old, salvaged plumbing fittings. My dad gave me a whole coffee can full of this stuff 15 years ago and it has collected dust in my workshop since.  I pieced together some things that looked good, even if they would do absolutely nothing in real life.

On top, I mounted a transformer salvaged from an old speaker cross-over.  Finally, the eye piece is a piece of PVC pipe with a fender washer crazy glued on the end and mounted into a little plywood block.

I’ll deliver it to the Marcelle this evening and watch the rehearsal to make sure that I don’t need to make any more lighting adjustments.  Then, the show is in the hands of Mike Juncal, the stage manager…

On to the next one.