We cut the tubes to 10′ long, because 12′ is just too tall for the Marcelle, especially if they are to stand on top of a 32″ high platform.  We made bases and caps for the tubes out of 2x4s and then trimmed them with 1-1/4″ foam backer rod.  I made 3 full-height and for the fourth, I got a 4′ sonotube and made a “broken” column, to reinforce the ruins aesthetic.    The broken one has the same base as the others, but I cut the top at an irregular angle, fitted a disc of 1″ styrofoam board inside, and then using a can of spray foam, made it look like broken stone.  After the foam dried, I sanded the edges smooth with the sides of the tube.

When you wander ruins, pieces of fallen and broken columns are typically scattered around the site. With the 2 foot off-fall pieces of sonotube, We cut them to 16″ long and fitted a disc of 3/4″ plywood in each end to make cylinders. These will be painted like stone, the same as the rest and scattered around the set.  Scott can use them as stools if he chooses or they can just be added decoration. 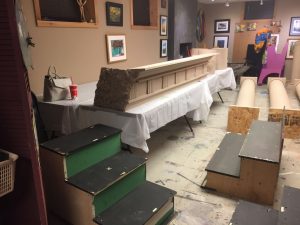 Then Richard and I turned our attention to the pediment on top.  With the 32″ platform and 10′ columns, there was only about 18″ left below the lighting grid in the theater, so this pediment is only a short, horizontal beam.  We framed it out of 2x2s and covered it with luan.  Then began adding lumber, large crown moulding, and blocks of styrofoam board to create the Greek architectural elements.

Sunday, Melanie joined me for a few hours and we base coated everything that was built on Saturday.

Tuesday afternoon, Kate met me at the shop and we turned our attention to the next piece.  In Hortenses’ house, we need a “bed”. But I we are staging this in ruins and I didn’t want to plop a bed in the middle of this Greek temple.  So, I cam up with the idea of taking the broken chunk of the pediment and placing it on the ground, like it had fallen.  It would give use a solid mass in character with the rest of the ruin. The top of the pediment is typically a sloped gable end of a greek temple, and that sloped surface could double as a surface for Hortense to lay on as her bed.  We framed it similarly to the piece that sits atop the columns, except that we made sure that the framing inside was stout enough to support a person’s weight.  Then the top sloping surface was covered with 1/2″ OSB instead of luan. With that, they can sit on it or Hortense can lay on it.  With the slope, on a stage platform raised 32″ above the audience, we should still be able to see her face as she lay there. 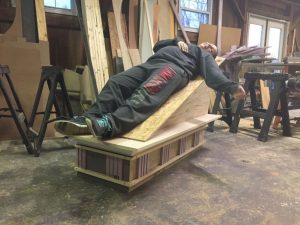 Kate and I also pulled stair units out of storage that we can combine to make the front, broad steps up to the “temple” platforms. 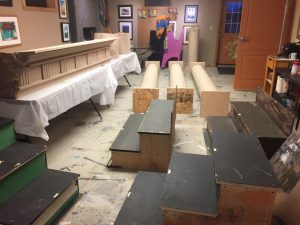 Today, Sharon will finish base painting and then texture roll everything that we have built to date.  Next on the agenda for the weekend will be the mine entrance and the few platform facings that we need. Those can be painted next week along with the ground row that Gary began.  We should be good to go for load-in on Feb 11.

Until next time… R