The design comes together and fabbing begins… 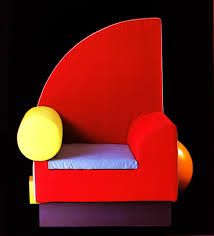 In my last post I talked about design in the 1980's, where it came from and what it represented.  Parallel to my comments, Scott talked about the political and cultural shifts that occurred in our country in the 1980's, in large part because of the Reagan administration.  But really, our whole culture began shifting in the 1960's with Kennedy's assassination, the Vietnam War, the counter-culture movements...these events all eroded the "age of innocence" in America. Over the next 3 decades, we went from "Ask not what your country can do for you, but what you can do for your country" to "Its all about me. What do I get out it. What's in it for me."  In the 1980's, the ME generation hit maturity and not just our country, but the whole world. We will never be able to turn back.

For the set, I really tried to capture the essence of the 1980's...this self-centered, shallow attitudes.  The plastic, cheap, mass produced classical forms of post-modernism metaphorically represent the pervasive attitude of the time.  The rebellion to the the style for the masses of 20th century modernism.  Everyone wanted big columns and arched windows, even though no one could really afford to build that way on a middle-class income. 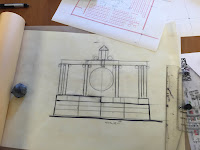 The permanent centerpiece of the set is a simple geometric form composed of a square flat panel in the center with a large circle cut out of the center, flanked with simple columns, too slender to be truly classical elements creates the backdrop for the show. Simple and pure geometric forms, indicative of the style are used throughout.  This composition sits on top of a pedestal composed of two platforms.  These platforms are skirted in an irregularly proportioned and inconsistent grid of teal blue panels with reveals between them of a contrasting yellow.

Most scenes are played on this basic setting, with lighting changes to help define alternative locations.  A few scenes require a specific component to help anchor the location.  The scene in the convenience store requires a peg for corn nuts that Heather Chandler as well as an indication that there is a Slurpee machine.  Heather Chandler's house requires two rooms simultaneously, her bedroom and the kitchen where Veronica and JD concoct her last drink.  Veronica's bedroom needs a closet for her to lock herself inside of to avoid JD.  Finally, the school must have at least one functioning locker that used to belong to Heather Chandler that the other two Heathers are cleaning out. 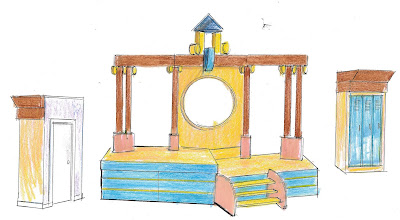 I am creating two free-standing elements based on a rolling 2'x4' platform. Each of them have a side that has a bank of lockers, one of which will open and be decorated with a few school items.  When pulled away from the wall and flipped around,  one becomes an inside corner of Heather Chandler's kitchen, including the sink.  The backside of the other is a simple closet door, behind which Veronica can hide.

The only other components that are needed for the show are four benches, each 4' long.  One of these will represent the car that Veronica and Heather McNamara lock themselves in during the scene in the cemetery.  The four benches are then arranged on stage as pews for the funeral scene that opens act two. These are just carried on and off by the cast that use them as the scenes change.

FABRICATION BEGINS...
SATURDAY
Kate and I met at the shop at 8AM to begin building.  When we walked in, we were met with a huge mess of materials that had been dropped when we moved New Line last month.  I hauled a trailer full of materials back to recycle.  But, two days after the move, Kathleen and I left for Washington DC and things have been a bit crazy in the 10 days since we returned.

So, construction was delayed for a day while Kate and I spent the morning taking things apart, moving prop pieces into the loft for storage and cleaning up the mess. 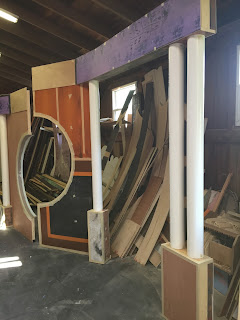 We met at the shop about 9AM and began building the center backdrop panels and columns.  We finished them by about 1PM and turned our attention to the colonnades that flank the large panel. 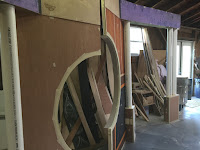 Melanie arrived mid afternoon and we finished them up about 4PM just in time for a photographer from the RFT to show up.  Apparently, they are doing a feature on New Line for this weeks paper and wanted a few photos of something happening...so we were it.  After photos, while I talked to him, the ladies cleaned up the days mess of sawdust and scraps. 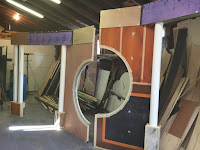 On Tuesday evening, we will begin making the convenience store counter and the bed.


On Thursday, I'll get Sharon to put a coat of paint on whatever is finished.  I'm sure that painting with these colors will bring back nightmares almost as gruesome as the ones that I have about disco and the 70's

By next weekend, I hope to be on to two two rolling locker units.  The goal is to have it all built and painted before Labor Day weekend so that Kathleen and I can take our new exchange student, Winnie to Chicago without me feeling stressed and guilty for having work in the shop to do.

More next week when I have a progress update.
R