What an exhausting weekend...

I keep saying that I am getting too old for this crap, but I keep doing it anyway.

Friday evening
I got the enclosed trailer loaded with all of the small items that are fragile or that I was afraid would not travel well exposed to the wind. Stopped at Home Depot for another gallon of black paint, just in case.

Saturday
I got to the shop about 7:30 on Saturday morning and spent a few minutes getting tools together. Gary arrived at 7:45 and we started loading the open trailer.  By the time that Patrick arrived at 8, we had it packed and ready for tie-downs.

We even had extra room so the three of us went into the loft and pulled down old furniture to use as "junk" on stage.  Managed to get everything that we needed into the open trailer, so that means that I don't have to make a second trip later this week with furniture.

Pulled in at the theater a few minutes after 9 and began unloading.  Not long after, help began arriving.

All in all, we had four from the cast show up; Kent, Zany, Luke, and Todd all lent very able expertise on construction.  I put each on a team, and then added Patrick, Melanie, Kate, Paul Troyke and Kathleen along with Kee and two other of Kathleen's students. 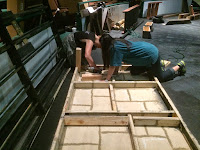 The set is basically three structures.  I set a team to each structure and spent my time bouncing between teams, explaining how things went together and sorting out pieces.

Left, Kee and Kathleen put legs on the platform that becomes the dock. 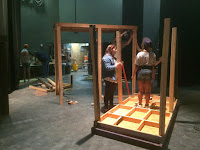 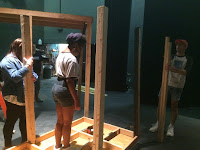 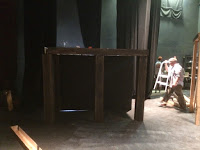 The stable was put together by Kent and Patrick.

In the photo, right, the platform is set in place, braced into the wing, and the skins are on the legs and face of the platform. After these were in place, fake diagonal braces were fit between the legs, the upper gable flats installed and the ship's ladder connected.


Meanwhile, Paul and Melanie constructed the "bridge" linking the top of the jail with the top of Peachum's shop, giving access to the gallows platform.

Luke blacked out all incidental wood that was added during installation including safety rails and braces. After all platforms were up, skins applied that made them look like heavy timbers, and the upper level flats put on, We pulled out the "junk". 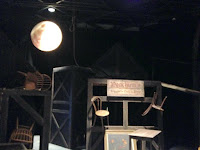 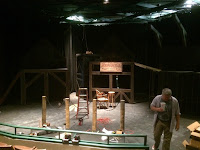 Finally, patrick, Luke and I hung the moon up and right of the gallows and threw a noose over the one light bar, just to have a sense of the composition. 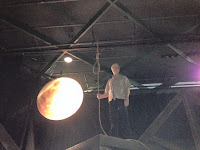 Most everyone was done and gone by 2PM and Patrick, Luke and I started to clean up.  Scott came by around 3PM and climbed around, officially dubbing it our "Tudor jungle gym"! 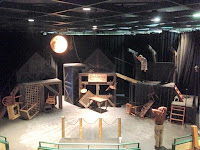 Sunday
I went back into the shop, wired the special effects for the three gas lights. I purchased a strand of 6 Luminara candles that they sell to put on a Christmas tree.  I cut 3 off of the strand.  Since they are wired in parallel, each will operate on its own 5VDC AC adapter.  Tonight, I will fit each lamp post with one so that they flicker like gas lights but can be turned off and on from a non-dim channel of the lighting system.

I made the pieces for the two arches and put together the roller mechanism for the pull-down map of London that I printed on the large format printer at the office. 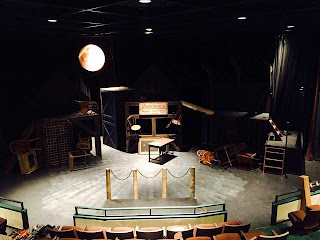 This afternoon, I am headed back to the theater to install the pieces that I made yesterday, add some black fabric maskings, touch up some paint and make the gas lights glow...
R