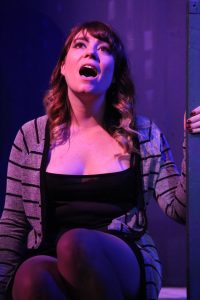 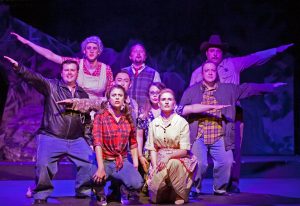 Bat Boy hit tech on July 30 and opened first on August 4 and ran through August 20. So, I had to have everything ready for July 30.  We had erected the platform structure when we struck the previous show on June 26, but no finish work had begun before I left on vacation.  I had to build everything, install it and get it painted.  I ended up ignoring U-Studios office, working many daytime hours because they were on stage rehearsing in the evenings.

In the mean time, on July 23, we loaded the set for “Tell

Me On A Sunday”. The following Saturday, July 30, we hung and focused the lights for the show, finishing up the next day.  I programmed the lights on Friday morning, August 5 and we had cue to cue rehearsal on Saturday the 6th…it lasted all of 75 minutes. A new record for New Line!  The show opened 5 days later on August 11 and runs through the 27th. In the span of three weeks, I managed somehow, and with very little sleep, to open TWO shows a week apart after having been out of the country for three weeks.  Sheesh! But, it gets better…

While I was gone, tragedy struck at Stray Dog Theatre when they lost their production manager, Jay V. Hall, to suicide.  This happened halfway through the rehearsal process of Bat Boy and a little over a month before the start of their after-school program in which he was integral as a manager.  Gary Bell, Rob Ogden, and the administration at Stray Dog were in a mad dash to get everything finished and all of the bases covered for a man who wore MANY hats.

Now, architecture has been rather slow for several months and I had already been batting around the idea of a change. After a brief discussion with Gary, Kathleen, Gary and Rob, I was asked to take on the role of Production Manager, filling several holes left by Jay’s passing.

Since August 1, in addition to my scenic and lighting responsibilities for two companies, I have cleaned Tower Grove Abbey 11 times, put on 60 – 70 miles each day driving between city schools (not including my commute from IL to the Abbey), shopped for supplies, repaired toilets, doors, and a myriad of other tasks that Jay would have done.  I have a new found respect for all that he did.  I will never fill his shoes…

I can say that I have made a very big jump in my life.  After 30 years practicing architecture, I have turned the corner and made a leap into earning a full-time living in the performing arts.  It is frantic, harried, and occasionally pretty stressful, but I haven’t been happier about a career decision in many years.

See you at the theater…R